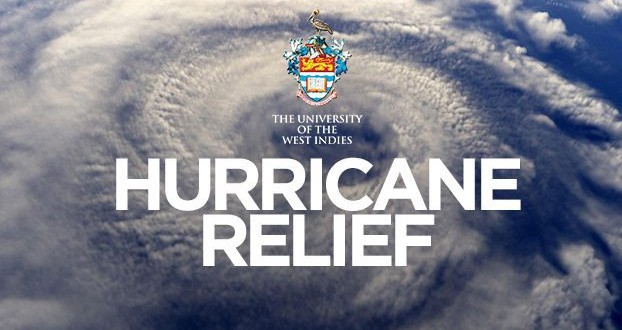 Regional Headquarters, Jamaica. W.I. 29 September 2017. During the past month the Caribbean has been pummelled by two catastrophic category 5 hurricanes: Irma and Maria. The aftermath of these hurricanes has been the loss of lives and significant damage to infrastructure across several Caribbean islands. The University of the West Indies (The UWI), has been working closely with the Caribbean Disaster Emergency Management Agency (CDEMA), as well as Heads of Government to mobilise its resources and expertise to provide support and relief.

Hurricane Irma, with maximum sustained winds near 185 mph on September 5, 2017, impacted the states of Anguilla, Antigua and Barbuda, Cuba, the Virgin Islands, St. Maarten/St Martin, and continued its destructive path to the Turks and Caicos Islands and the northern border of Haiti, as well as the south eastern islands of the Bahamas. Then, Hurricane Maria followed, forming into a category 5 hurricane on September 18, 2017, headed to Dominica with wind speeds of 155 mph. Guadeloupe, St. Kitts and Nevis, the Virgin Islands, Puerto Rico, the north eastern coast of the Dominican Republic, and the south eastern Bahamas were all impacted.

In an early statement after Irma’s devastation, Vice-Chancellor, Professor Sir Hilary Beckles emphasised the University’s commitment to its regional colleagues and partners, and a readiness to work together to bring the countries of the Caribbean back on a firm, positive development trajectory. On September 13, Vice-Chancellor Beckles as part of a special team, visited Antigua and Barbuda to assess the hurricane damage and formulate a relief strategy following Irma’s destruction. A similar on-site evaluation visit to Dominica is currently being planned by the Vice-Chancellor for next week.

Acknowledging the immediate need for emergency assistance, The UWI has responded with a two-phased approach to its response efforts. Phase 1 or the “rapid response” phase has been largely concentrated on the deployment of relief aid and experts to assist in the areas of greatest need as identified by the impacted states (including for example, infrastructure, housing, agriculture, tourism, and psychosocial counselling). UWI experts, working as an integrated part of CDEMA teams or in response to direct requests of the particular Heads of Government, have been deployed to assess the magnitude of damage in these above mentioned sectors to inform the recovery process. Among those deployed to date are Dr. Richard Clarke of The UWI St. Augustine’s Department of Civil Engineering working as part of the CDEMA’s initial impact assessment team in Dominica; as well as a team led by Dr. Asad Mohammed of The UWI St. Augustine’s Department of Geomatics Engineering and Land Management working at the request of Prime Minister Browne for assistance in formulation of Barbuda’s redevelopment plan. At present, The UWI Mona’s Department of Sociology, Psychology & Social Work is also working with Antigua’s Department of Social Services, with at least three team members from the Social Work Unit already on the ground in Antigua. A psychosocial team from The UWI Cave Hill Campus is also being prepared for deployment shortly to Dominica and to St. Lucia, where persons from Dominica are being relocated. Among those team members are Dr. Letnie Rock (team leader), Ms. Ayodele Harper, Mrs. Therese James and Mrs. Gina Griffith—Psychology and Social Work faculty from the Department of Government, Sociology & Social Work. These social workers and psychologists will provide a psychosocial response in the first instance with a plan to follow up regarding the long-term psychosocial effects of the disasters on the citizens and training of persons regionally to provide a psychosocial support in the aftermath of disasters.

The UWI Disaster Risk Reduction Centre (DRRC)—the University’s disaster coordinating centre, established since 2005—is the focal point of contact for all stakeholders in the disaster response efforts, and is the UWI entity to which UWI experts can volunteer their services as required. The DRRC can be reached at Telephone: (876)-977-1659, (876) 977-5545, or email Barbara.Carby@uwimona.edu.jm.

Phase 2, or the “recovery and rehabilitation phase”, focuses on the mobilisation of expertise to assist in the restoration of these affected islands—with special priority, from The UWI perspective, on the sectoral areas of education and healthcare. The damage assessments conducted in Phase 1 assessments will form the basis for determining projects to enable, for instance, the reconstruction and/or relocation of communities left most vulnerable in the wake of these disasters, and mitigate future vulnerability. To this end, The UWI is also actively seeking funding for more extensive health-related initiatives in the affected islands. The UWI’s own Open Campus sites in the territories have also sustained damage, mostly minimal, with the exception of Dominica, where over 90% of the site has been severely damaged.

The UWI and CDEMA have also agreed to mobilise resources for disaster relief and construction within the Caribbean, through a newly established New York-based Caribbean Emergency Management Association (CEMA), which will mobilise networks, friends and stakeholders, including private sector, civil society, Non-Government Organisations (NGOs), media and tertiary institutions, specifically in North America, for supporting the work of CDEMA and The UWI in responding to disaster relief requirements in the Caribbean.

The American Foundation for The UWI, New York (for North American donations)
Visit www.afuwihurricanerelief.org – Select the donate button and follow the prompts
OR
Text to donate on mobile phones – Text keyword AFUWI to 41444. A message will appear. Follow the prompts. Note: Mobile phone donations may be subject to text messaging charges based on the plan donor has with carrier.