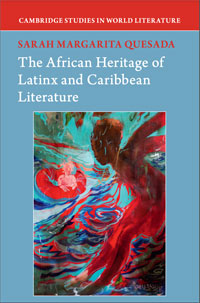 The African Heritage of Latinx and Caribbean Literature unearths a buried African archive within widely-read Latinx writers of the last fifty years. It challenges dominant narratives in World Literature and transatlantic studies that ignore Africa’s impact in broader Latin American culture. Sarah Quesada argues that these canonical works evoke textual memorials of African memory. She shows how the African Atlantic haunts modern Latinx and Caribbean writing, and examines the disavowal or distortion of the African subject in the constructions of national, racial, sexual, and spiritual Latinx identity. Quesada shows how themes such as the 19th century ‘scramble for Africa,’ the decolonizing wars, Black internationalism, and the neoliberal turn are embedded in key narratives. Drawing from multilingual archives about West and Central Africa, she examines how the legacies of colonial French, Iberian, British and U.S. Imperialisms have impacted on the relationships between African and Latinx identities. This is the first book-length project to address the African colonial and imperial inheritance of Latinx literature.