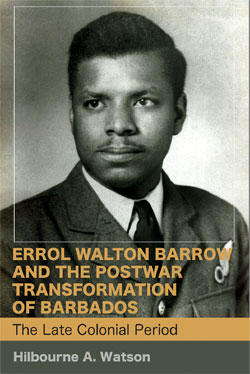 The University of the West Indies Press is pleased to announce that Errol Walton Barrow and the Postwar Transformation of Barbados: The Late Colonial Period by Hilbourne A. Watson is now available.

Beginning in the 1920s, Barbadians and other British West Indians began organizing politically in an international environment that was marked by a severe capitalist economic and financial crisis that intensified in the 1930s. The response in the British Caribbean during the 1930s was in the form of rebellions that demanded colonial reform. The ensuing struggles resulted in constitutional and political changes that led to decolonization and independence. In Errol Walton Barrow and the Postwar Transformation of Barbados: The Late Colonial Period, Hilbourne Watson examines the contradictory process through the lens of political economy and class analysis, informed by an internationalist historical perspective that centres the concerns and interests of the working class.

Britain freed the colonies in ways that reflected its own subordination to US hegemony under the rubric of the Cold War, which served as the geopolitical strategy for liberal internationalism. Watson’s analysis concentrates on the roles played by the labour movement, political parties, capitalist interests, and working-class and other popular organizations in Barbados and the British Caribbean, with support from Caribbean-American groups in New York that forged alliances with those black American organizations which saw their freedom struggles in an international context. Practically all the decolonizing (nationalist) elites in Barbados and other British Caribbean territories endorsed a British and American prescription for decolonization and self-government based on territorial primacy and at the expense of a strong West Indian federation that prioritized the working class. This move sidelined the working class and its interests also set back the struggle for self-determination, liberty and sovereignty.

Watson situates the role Errol Barrow played in the transformation of Barbados in the wider Caribbean and international context. His study draws on archival records from Britain and Barbados, interviews and other sources, and he pays close attention to how the racialization of social life around nature, culture, history, the state, class, gender, politics, poverty and other factors conditioned the colonial experience.