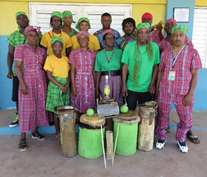 Through the support of the Center for Collaborative and International Arts (CENCIA) at Georgia State University and other organizations, the Granny Nanny Cultural Group, a 13-member Jamaican Maroon performance ensemble from the Moore Town Maroon settlement, will be touring the United States in fall 2016. The group was formed in the early 1990s to honor the legacy of their 18th century Akan priestess and warrior ancestor, Queen Nanny of the Windward Maroons (AKA Grandy Nanny, Granny Nanny, or Nanny of the Maroons), who is Jamaica’s only female National Hero. They will be staging musical performances, conducting master workshops and demonstrations (drumming, dancing, singing, and arts & crafts), and giving talks at colleges, universities, K-12 schools, libraries, community centers and festivals. In 2008, the Maroon heritage of Moore Town was inscribed on the UNESCO Representative List of the Intangible Cultural Heritage of Humanity (originally proclaimed in 2003). In 2015, their ancestral territories in the Blue & John Crow Mountains National Park in Jamaica were inscribed on the UNESCO World Heritage Site list.

The Director of the Granny Nanny Cultural Group, Major Charles Aarons, is a world-renowned master drummer, Abeng (side-blown cow’s horn) blower, traditional healer, oral historian, and cultural activist. Major Aarons has performed on important stages in Jamaica, the United States and Europe, including during the historic visit of Nelson and Winnie Mandela to Jamaica in 1991, as well as at the 1992 American Folklife Festival at the Smithsonian Institute in Washington, D.C. He has also given lectures and conducted workshops at leading colleges, universities and high schools in the United States. Furthermore, Major Aarons has appeared on important musical recordings, such as Drums of Defiance: Maroon Music from the Earliest Free Black Communities of Jamaica (Smithsonian Folkways Recordings CD, 1992). Other members of the group have appeared at the United Nations Headquarters and the Schomburg Center for Research in Blacks Culture in New York City, among other prestigious venues.

The US tour, which will begin in Atlanta in August 2016, will feature live performances, including songs from their forthcoming album Granny Nanny Come Oh (produced by Dr. Harcourt Fuller), recorded live in Trench Town, Jamaica, and which features a range of traditional Maroon musical genres, oral histories, stories, and Maroon language. There will also be screenings of the 2015 documentary-film Queen Nanny: Legendary Maroon Chieftainess (produced by Dr. Harcourt Fuller and Roy T. Anderson), in which members of the Granny Nanny Cultural Group appear as performers and actors. In addition to being part of the United Nations Remember Slavery Program film series, Queen Nanny was nominated for an Africa Movie Academy Awards (AMAA) honor at the 2016 Pan African Film Festival. The tour will also feature a photo exhibition on the Maroons, traditional Maroon arts & crafts, as well as intellectual symposia with scholarly publications, poetry, literature readings and talks on topics of historical, contemporary, political, cultural, spiritual, and environmental relevance to the Maroons.

We invite the Caribbean Studies Association community to be a part of this historic tour by bringing the Jamaican Maroon Cultural Tour to your campuses and organizations. We especially encourage groups of institutions in particular cities to collaborate by pooling their resources to invite the group to present. Please email Dr. Harcourt Fuller, Assistant Professor of History at Georgia State University, at hfuller@gsu.edu for further details, and visit www.grannynannymaroons.com for more information about the Jamaican Maroons, the Granny Nanny Cultural Group, and their tour schedule.