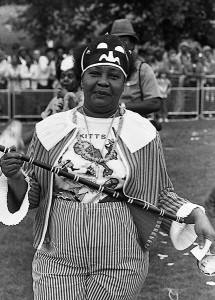 A three-day celebration of Caribbean Carnival cultures will take place at Leeds Beckett University next month to mark 50 years of the Leeds West Indian Carnival in 2017 – the first Caribbean-style street carnival in Europe.

The event – ‘Power, Performance and Play – An International Conference on Caribbean Carnival Cultures’, will be hosted from 19 to 21 May 2017 by the Centre for Culture and the Arts at Leeds Beckett in partnership with the Leeds West Indian Carnival. More than 50 researchers from across the world will gather in Leeds to share their work with participants alongside interactive workshops, music, dance, Caribbean food and carnival costumes.

The conference has been organised by Dr Emily Zobel Marshall, Senior Lecturer in the School of Cultural Studies and Humanities at Leeds Beckett, whose passion for the cultures of the Caribbean stems from her heritage in the French island of Martinique. Her grandfather, Joseph Zobel, migrated to Paris and published a best-selling novel based on his childhood on a Martinican sugar plantation, made into a famous film with the English title of Black Shack Alley. Conference co-organiser Professor Emeritus Max Farrar, who is both an academic and political activist, has been involved in carnival in Leeds for more than 40 years as a researcher, official photographer and participant. 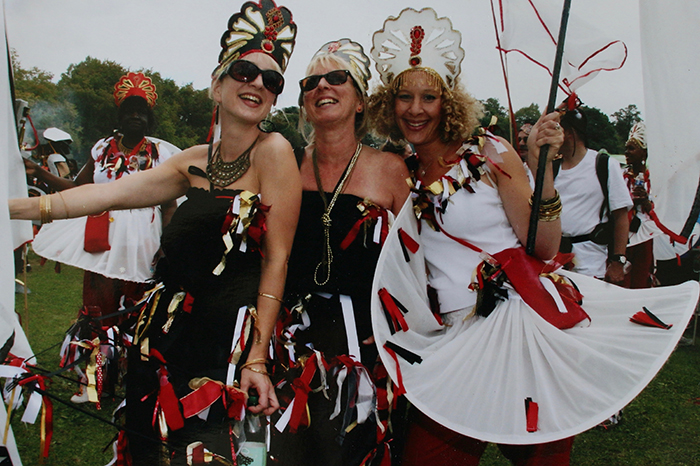 Dr Zobel Marshall said: “The conference has a global scope and will see the launch of a new Carnival Cultures research group at Leeds Beckett University. The group aims to deal with some of the issues regarding the underrepresentation of black and minority ethnic (BME) students and cultures in academia, whilst developing stronger community partnerships. It will also directly feed into strengthening the Leeds bid for 2023 European Capital of Culture. As part of this, publications resulting from the conference will be made available both in print and online.”

Dr Zobel Marshall will be among the researchers presenting their work at the conference. She examines traditional carnival masquerade characters, such as the Midnight Robber, and asks if they can still be interpreted as historical resistance figures or if commercialisation and tourism has drained them of their appeal and influence? 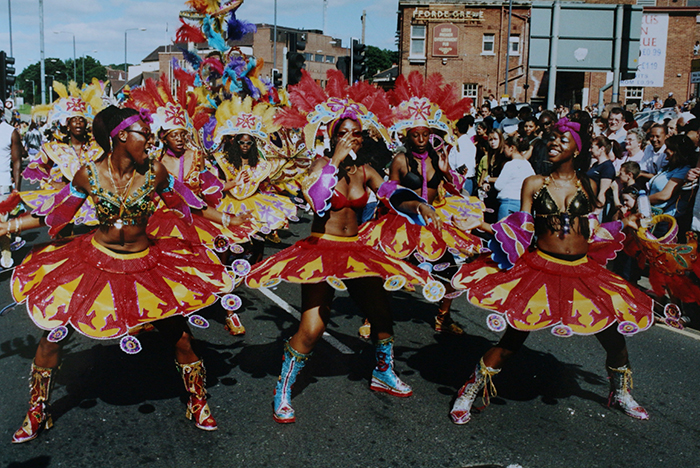 Speaking about Dr Zobel Marshall’s research, co-organiser Max Farrar said: “One day she’s in a house in a low-income neighbourhood in Port-of-Spain, Trinidad, interviewing a very old man lying in a home-made bed about his life as one of Trinidad’s most famous Midnight Robbers, the Trinidadian carnival’s revolutionary ‘bad man’ figure. A few days later she’s patrolling Port-of-Spain on carnival day in a cape and a hat, armed with a self-penned Midnight Robber speech. This is Dr Emily Zobel Marshall doing research for her paper which she will present at the forthcoming conference. There aren’t many others who can do research like that.”

Dr Zobel Marshall added: “Traditional mas characters such as the Midnight Robbers are in danger of being forgotten as the beautiful bodies in bikinis usurp the traditional carnival masquerade. This is one of the themes of our conference.”

Chair and Founder of the Leeds West Indian Carnival, Arthur France MBE, will be one of the keynote speakers at the conference, and will address the Carnival’s importance to the city of Leeds. 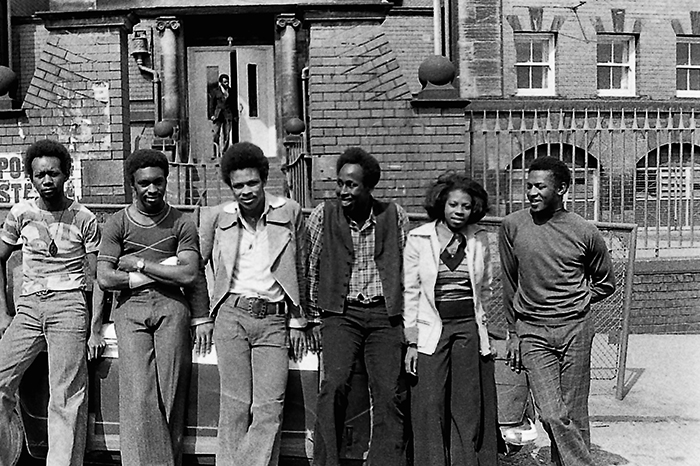 Another key theme of the conference will be the commercialisation of carnival culture. Dr Zobel Marshall explained: “Several of the researchers speaking at the conference are examining how the commercialisation of carnival has reduced the numbers of participants who take up political themes and insert them into troupes that perform on the road on August Bank Holiday Monday in Leeds. The Harrison-Bundey troupe, with Leeds solicitor Ruth Bundey at its heart, are resisting this commercialisation, and they will be presenting one of our workshops.” 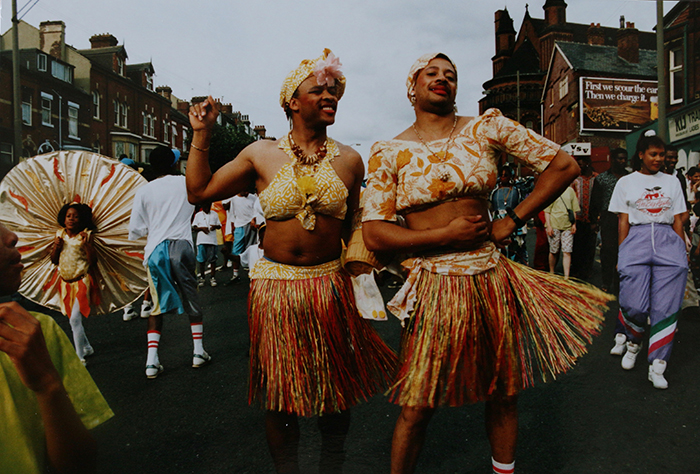 The keynotes will all take part in a conversation with Max Farrar, who has photographed the Leeds Carnival since 1972 and participated himself since the early 1980s, and the founding members of the Leeds Carnival, who will explain why they created the first Caribbean-style street carnival in Europe. Max said: “The keynote panelists were the original carnival rebels, insisting against some opposition within the Leeds Caribbean community that a carnival was necessary and possible, despite the climate of racial hostility and police malpractice that the community encountered in those days in Leeds.”

Arthur France MBE added: “The Leeds Carnival has its roots in Africa, Europe and the Caribbean. For 50 years we have brought the message of emancipation and multiculturalism to the city of Leeds. This conference will be an opportunity to celebrate our achievement and discuss how we can make it even more significant in years to come.”

Further research which will be showcased at the event includes: Carnival performance as catharsis for gay people of colour; the history of carnival music such as calypso and soca; the African influence on carnival practices; the Barbados ‘Crop Over’ carnival; and the Carnival as an overlooked opportunity to provide culturally-specific psychosocial support for Black communities in the UK. Presenters are travelling from countries including Trinidad, Jamaica, Barbados, Dubai, the US, Canada, Australia, and Italy.

Alongside research discussions there will be the chance to take part in interactive workshops spanning photography, music, film, costume design, creative writing, and dance.  Well-known Leeds-based poets Khadijah Ibrahiim and Malika Booker will be running an interactive workshop alongside David Hamilton, founder of the of Phoenix Dance Company on Creative Writing and Dance to explore what carnival means in relation to rhythm and the body and its links to African spirituality. There will also be a chance to peruse and buy books from Leeds-based Caribbean publishers Peepal Tree Press and the journal of transcultural writing Moving Worlds.

These artistic elements of the conference have been supported by the Arts Council’s ‘Grants for the Arts’ programme. There will also be evening entertainment on offer: a night at the Leeds West Indian Centre with Caribbean food and music; and a reception at the Leeds Civic Hall with Arthur France MBE, Lord Mayor Gerry Harper, dinner, and performances by poets, Malika Booker and Maggie Harris, and the New World Steel Orchestra.

Conference participants will also be invited to take part in a Black history walk through the city of Leeds, led by Joe Williams from Heritage Corner.

For more information, and to book a place on the conference, please visit http://bit.ly/LeedsCarnivalConf Prices for both days (including the Civic Hall reception) range from £30-£110.

Ends
For further details please contact Carrie Braithwaite in the Communications team at Leeds Beckett on 0113 812 3022 or email c.braithwaite@leedsbeckett.ac.uk