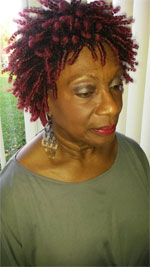 Before academia, Dr. Lashley held positions in Trinidad and Tobago, as the Supervisor of Public Relations at the Water and Sewerage Authority, Research Officer in the Public Relations Department of the Prime Minister’s Office, and was the first Public Relations Officer appointed by the Central Bank of Trinidad and Tobago.  While still at the Central Bank, Dr. Lashley was invited to take up a full-time position with the UWI, St. Augustine, Trinidad, to teach  Agricultural Communication in the Department of Agricultural Extension, which she accepted.  This appointment was her entry to a career in academia, which would span over a period of more than 30 years.

As is requisite for academe, Dr. Lashley left the University of the West Indies, and went on to Northwestern University to pursue her doctorate in Mass Communication, concentrating on Television Studies.  Her dissertation was:  “Disseminating Agricultural Information to Farmers in Trinidad and Tobago through Television”.

Combining her practitioner’s and academic skills, Dr. Lashley was able to teach and design courses for research in various aspects of mass communication/communication studies including International Mass Communication, Cultural Communication, and Political Communication, at universities, internationally.  In the USA, she taught at Eastern Illinois, Creighton, Florida Memorial, Indiana University-South Bend, and Claflin universities.  Occasionally, she worked with The Foundation for Democracy in Africa program, training media practitioners from English-speaking countries in Africa.  In the United Arab Emirates, she taught at the American University of Sharjah.

Dr. Lashley has presented several research articles at various academic forums internationally, and has published scholarly research mainly based on Trinidad and Tobago, in the areas of electronic media programming, the calypso as mass communication, and political commentary in calypso. She has been a lifetime member of CSA, for over 26 years, and has presented sixteen papers on the aforementioned topics.  She has also organized three panels – Mass Media and Caribbean Society, 15th Annual Caribbean Studies Association Conference, Port of Spain, Trinidad, May, 1990, Issues in the Media of the Caribbean , 34th Annual Caribbean Studies Association Conference, Kingston, Jamaica, June 2009, and Hegemony and Dominant Ideology: Racial and Ethnic Representations in the Media of two Commonwealth Caribbean countries,  37th Annual Caribbean Studies Association Conference, Gosier, Guadeloupe, May 2012.

Included in Dr. Lashley’s major publications on the aforementioned topics, are:  Effects of American Popular Music on the Youth of Trinidad and Tobago: A Study in Cultural Imperialism. In B. J. Anderson Caribbean Society and Popular Music. McGraw-Hill Custom College Series, New York, 1996;  Television and the Americanization of the Trinbagonian Youth: A Study of Six Secondary Schools. In H. S. Dunn Globalization, Communications, and Cultural Identity. Ian Randle Publishers, Kingston, Jamaica, 1996;  Television and the Cultural Environment in Trinidad and Tobago: A Need for Policy. Bulletin of Eastern Caribbean Affairs. Vol. 20, No. 4, Dec. 1995,  Intimidation of  Calypsonians by the UNC Government of Trinidad and Tobago. Proud Flesh: New Afrikan Journal of Culture, Politics & Consciousness, Issue 3, 2004. http:www.proudfleshjournal.com.

While at Creighton University, Dr. Lashley received a Faculty Research Grant in 1995, which enabled her to be part of a delegation of U.S. academics and media practitioners on a study mission to China, organized by the U.S. Association for Education in Journalism and Mass Communication (AEJMC).  The delegation called on universities in Shanghai, Beijing, and Guangzhou, to investigate journalism/mass communication curricula, visited Xinhua, the national news agency, and media houses in the three cities.  She did a research presentation, “Developmental Journalism Alive? – A Content Analysis of the China Daily.” 18th National Third World Studies Conference, University of Nebraska, Omaha, Nebraska, October, 1995,   two lectures, “Women and Contemporary China.” Guest Speaker, League of Women Voters, International Relations Meeting, Omaha, Nebraska, December, 1994, and “A Look at China in

Dr. Lashley received a Faculty Research Grant from Indiana University, South Bend, and was a delegate on a similar AEJMC study mission to South Africa in 2004.  The delegation visited and examined the journalism/mass communication curricula at universities in Johannesburg, and Cape Town, and media houses in those cities.  She was tasked with examining the status of black practitioners in South Africa, ten years after the fall of apartheid.  This resulted in the publication, “The Role of an NGO in the Training of Media Practitioners in Post-Apartheid South Africa.  African Growth and Opportunity Act Civil Society Network Newsletter. Vol. 1, Issue 5, June 2004,”  two lectures, “The Status of Black Practitioners in the Media of Post-Apartheid South Africa,” sponsored by the Media  Association of Trinidad and Tobago,  Port of Spain, Trinidad, August, 2004, and “Impressions of the Media of  Post-Apartheid South Africa.”  Pan African Students’ Union Forum, Indiana University South Bend, Indiana, April 2004.

In 2010, Dr. Lashley retired from academia, after the Trinidad and Tobago Government under Prime Minister Patrick Manning, solicited and hired her as Special Technical Adviser to the Minister of Information.  During her tenure there, she produced the “Guide to Strategic Communication”, a manual which is used for communication purposes by all  Communications personnel of the various Ministries of the government.

Dr. Lashley’s work continues to be cited in many academic, and non-academic publications and lecture presentations.   On January 12, 2014, in an address at Queens Hall, Port of Spain, on the occasion of the National Action Cultural Committee’s 26th Annual Top 20 Stars of Gold and Calypso of the Year Ceremony, the Honourable the Chief Justice of the Republic of Trinidad and Tobago, Justice Ivor Archie, quoted several excerpts from her work on the calypso and political commentary.

Since her retirement, Dr. Lashley has been doing periodical assignments with the Broward County Public Schools, Florida.  She also serves as External Examiner/Reader for theses and dissertations in Mass Communication/Communication at various universities, and writes cultural communication-related articles for Trinidad and Tobago newspapers.