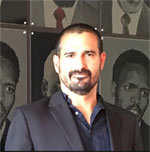 Professor Maldonado-Torres is an Associate Professor at the Department of Latino and Caribbean Studies and the Comparative Literature Program. His first book, Against War: Views from the Underside of Modernity, examined the bases of modernity/coloniality in terms of a paradigm of war through the work of Enrique Dussel, Frantz Fanon, and Enmanuel Levinas. In 2011, the Universidad de la Tierra in Chiapas, México, collected some of his essays on decolonial theory in a book entitled La descolonización y el giro de(s)colonial. He is also co-editor of Latin@s in the World-System: Decolonization Struggles in the 21st Century U.S. Empire, and guest editor of two special issues entitled “Thinking through the Decolonial Turn: Post-continental Interventions in Theory, Philosophy, and Critique” in the journal Transmodernity. He is currently working on two book-length projects. One is entitled “Fanonian Meditations,” which aims to spell out the epistemological basis of “ethnic studies” and related areas, as well as examine the relevance of decolonization at the epistemological, ethical, and political levels which continues the reflection on decolonial ethics and epistemology of his previous book. The other is “Theorizing the Decolonial Turn,” which provides a historical and theoretical overview of the “decolonial turn.” Professor Maldonado-Torres is particularly interested in the crossings of different genealogies of thinking, and their appearance in different genres of writing, discourses, artistic expressions, and social movements. Dr. Maldonado-Torres has been Co-Chair of the Religion in Latin America and the Caribbean Group at the American Academy of Religion, and has served in the board of the Hispanics Group at the American Philosophical Association. He presided the Caribbean Philosophical Association from 2008 to 2013, and is one of the organizers and signatories of the initiative to create a Latina/o Academy of Arts and Sciences in the United States. He was Director of the Center for Latino Policy Research at the University of California, Berkeley (2009-2010), and Chair of the Department of Latino and Hispanic Caribbean Studies at Rutgers University (2012-2015). Currently, he is member of the Executive Board of the Frantz Fanon Foundation in France, Honorary Member of the Fausto Reinaga Foundation in Bolivia and serves as book series co-editor of Critical Caribbean Studies (Rutgers University Press) and Global Critical Caribbean Thought (Rowman & Littlefield in association with the Caribbean Philosophical Association).