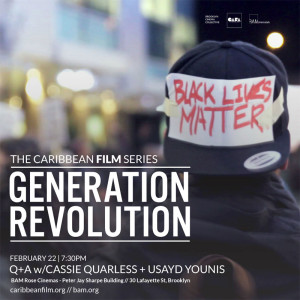 Black and brown youth in Britain fighting for racial, social, and economic justice, inspired by the USA’s #BlackLivesMatter movement, explore the messy world of activism in Cassie Quarless and Usayd Younis’ gripping documentary.

“Generation Revolution” follows the political and personal awakenings, breakthroughs and unfortunate disillusionment of young black and brown activists, many of them Caribbean-born or descent, in London. Among them are Tay, an 18 year old South Londoner, whose strong convictions and quick wit make him a magnet for friends and activists alike; and Arnie, 22, a firebrand whose fervor for the movement has allowed him to undertake some truly inspirational actions, but has also put him at odds with friends and allies. Then there is Tej, 25, a middle-class North Londoner whose conscience has thrown her from the sidelines into the deep end of political activism. We follow her as she struggles to reconcile her skepticism toward more controversial actions, with her belief in the need for radical change.

Along with directors Cassie Quarless & Usayd Younis, joining the extended post-film discussion are two young New York City activists.  Anthonine Pierre, a Haitian-American activist, is the Lead Organizer and a founding staff member for Brooklyn Movement Center, where she develops the capacity of Central Brooklynites to lead social justice campaigns on issues like street harassment and police accountability. With a steady resume in fields of government, youth development and national policy organizing, Pierre also serves as a board member for the immigrant rights organization Families for Freedom.  Saabah Folayan is fresh from the Sundance Film Festival where the community organizer and activist filmmaker premiered her documentary “Whose Streets?” which chronicles the experiences of activists living in Ferguson, Missouri when Michael Brown Jr. was killed.

Romola Lucas, co-founder of the Caribbean Film Academy (CaFA), which co-presents the Caribbean Film Series, shares, “It is important for us to bring this film, which highlights the generational struggles in parts of the worldwide black activist community, with New York City audiences, because of the large number of Caribbean people who reside here and as a way of sharing and exploring with them, the work of Caribbean activists, both in the region, and Diaspora, which often goes unseen.