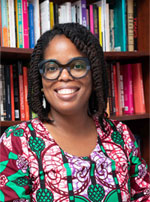 Dr. Tonya Haynes is a lecturer at the Institute for Gender and Development Studies: Nita Barrow Unit (IGDS:NBU).  She holds a PhD in Gender and Development Studies from the University of the West Indies and was the first graduate of the Nita Barrow Unit’s PhD programme in 2012, proudly representing a new generation of homegrown Caribbean feminist scholars.

Dr. Haynes’ research is animated by the liberatory potential of Caribbean feminist thought.  Her research on Caribbean feminisms and Caribbean feminist thought is published in Small Axe: A Caribbean Journal of Criticism, sx:archipelagos, Journal of Eastern Caribbean Studies and Love and Power: Caribbean Discourses on Gender (edited by Eudine Barriteau). Her most recent publication, “Contradictory Consciousness: Activist Men and Feminism in the Caribbean,” appears in Unsustainable Institutions of Men: Gender Power and the Contradictions of Transnational Dispersed Centres edited by Jeff Hearn, Ernesto Vasquez del Aguila, and Marina Hughson.  Her research on gender-based violence is published in Global Public Health and Social and Economic Studies. She is currently working with Dr. Tami Navarro of Barnard Center for Research on Women on a Special Issue of The Scholar and Feminist Online, dedicated to Caribbean feminisms, which will be published in 2019.

Through the European Union funded LIVITY Project, Dr. Haynes works with the Barbados Council for the Disabled and the Eastern Caribbean Alliance for Diversity and Equality to build coalitions of feminist organizers, youth activists, persons with disabilities and lesbian, gay, bisexual and transgender activists from the Eastern Caribbean.  Dr. Haynes is also active on a number of IGDS: NBU outreach projects which include: PATH Project in the Barbados Government Industrial Schools and the Caribbean Institute in Gender and Development: An Intensive Training programme.  She also serves as Coordinator of Graduate Programmes at the IGDS:NBU.

Dr. Haynes is the Barbados expert to the Follow up Mechanism to Monitor the Inter-American Convention on the Elimination and Punishment of Violence Against Women (MESECVI).  She represents the University of the West Indies Cave Hill, Campus on the National Social Justice Committee.

Dr. Haynes is currently working on her first book which examines feminist knowledge and Caribbean society.