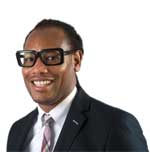 Dr. Tavis D. Jules (1980) is an American national born in Guyana. He is an Associate Professor of Cultural and Educational Policy and International Higher Education at Loyola University Chicago, specifically focusing on Comparative and International Education. He has taught a variety of graduate and undergraduate courses in the USA, Europe and Tunisia. He received his Masters of Arts in 2004 in International Educational Development, specializing in Peace Education, a Masters of Education (Ed.M) in 2005, and a Doctorate of Education (Ed.D.) in 2008 in International Educational Development —specializing in International Educational Policy Studies – from Teachers College, Columbia University. Before arriving at Loyola, he held a variety of positions internationally. From 2009-2011 he worked as the Head of Knowledge and Communication for the Globally Responsible Leadership Initiative (GRLI), where he was responsible for developing fundraising, communication, marketing, and education programs. He also worked as a curriculum specialist (2008-2009) for Freedom House where he wrote, coordinated, and edited an online curriculum manual and learning portal for educators teaching about democracy and freedom in Iran.

His work is unique in that it identifies two types of disruptive pressures that reshape national educational developments. One body of research explores how economic disruptive pressures at the regional level (what has been called supranationalism or meso-globalization), that is exogenously driven and promulgated with or without the blessing of the nation-states, contribute to national policy agenda setting attitudes (this is illustrated in his work that examines the nexus between regional economic integration and education). His other research strand identifies how political disruptive pressures, that are endogenous and spontaneous, lead to different transition or transtological reform moments in national educational systems (this can be found in his work on post-socialism and post-authoritarian spaces).

His vast professional and academic experiences have led to research interests on regionalism and governance, transitory spaces, and policy challenges in small island developing states (SIDS). His published work touches upon a variety of integral educational topics, and he authored and edited numerous books including Neither world polity nor local or national societies: Regionalization in the Global South – the Caribbean Community (Peter Lang Press, 2012); The New Global Educational Policy Environment in the Fourth Industrial Revolution: Gated, Regulated and Governed (Emerald Publishing, 2016); Educational Transitions in Post-Revolutionary Spaces: Islam, Security and Social Movements in Tunisia (with Teresa Barton, Bloomsbury Press, 2017); and Re-Reading Education Policy and Practice in Small States: Issues of Size and Scale in the Emerging Intelligent Society and Economy (with Patrick Ressler, Peter Lang Press, 2017). He also has written a plethora of article Caribbean Integration and its impact on the functional sectors (education, health, security and transportation) in the top Journals in his field Comparative Education Review, Research in International and Comparative Education, the Round Table and Globalisation Societies and Education. He has also written several book chapters ranging on topics from post-revolutionary higher education reforms in Tunisia to post-socialist conversions in the global South. In 2012, he was awarded the Research fellowship from Loyola University Chicago, part of a larger study funded by US State Department, to research Tunisia. This has stemmed further research interests in the region and has led to numerous articles. In 2017, he was awarded the International Institute of Islamic Thought (IIIT) Fellowship to continue his research in the Islamic Maghreb.  He also serves as the current book review editor for The Caribbean Journal for International Relations and Diplomacy.