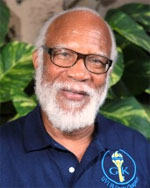 Professor Jones-Hendrickson was a lecturer in Economics at the University of the West Indies, Mona, Kingston, Jamaica. He joined the faculty of the UVI in 1976 as an Assistant Professor of Economics and, in 1990, he attained the rank of full Professor of Economics. He has held a number of Administrative positions at UVI, and has gained a number of honors. He was a two-term Chairman of the Faculty of UVI, 1986-1988; Chairman of the Division of Social Sciences, 1993-1996, the first UVI graduate to be so honored; a three-time student-awarded Faculty of the Year (once on St. Thomas campus and twice on St. Croix); and is a former member of UVI Board of Trustees.

Professor Jones-Hendrickson has served as External Examiner for the University of the West Indies, St. Augustine, Trinidad in economic theory, quantitative economics, health economics and specialized readings. He has served as External Examiner in Public Finance for UWI, Cave Hill, Barbados and Mona, Jamaica. Since 1985 he has been involved with the Caribbean Examinations Council (CXC), first as Assistant Chief Examiner and then Chief Examiner in Principles of Business. He is now involved with CXC at the level of CAPE in Economics. 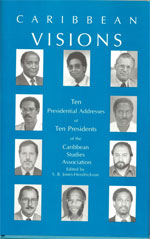 Professor Jones-Hendrickson is a prolific writer/scholar having written and or published more than 100 articles (see http://library.uvi.edu). He has presented several original works in economics at regional and international conferences covering public finance, monetary economics, public choice policy, immigration, and labor market economics. Among his books are Readings in Caribbean Public Sector Economics (1981), (co-authored with Fuat Andic, formerly of the University of Puerto Rico); Public Finance and Monetary Policy in Open Economies (1985), and Caribbean Visions (1990, Editor). Dr. Jones-Hendrickson has also published two volumes of poetry and four novels: his first novel is Sonny Jim of Sandy Point (1991). His second novel is Death on the Pasture (1994), and his third entitled Andy Browne’s Departure (2007). His most recent novel is Dana, Steven & Brenda (2009). Dr. Jones-Hendrickson’s most recent book in economics is a compilation entitled Essays on the Organization of Eastern Caribbean Economies, (2006), iUniverse.com. A Weekend in Paradise and Essays on the Economies of St. Kitts and Nevis are his two most recent works of non-fiction.

From January 2001 to September 2005, Professor Jones-Hendrickson was the Ambassador of St. Kitts and Nevis to CARICOM, the OECS, and the ACS. Among his other honors are his being honored as President of the Caribbean Studies Association, 1983-84; honored for his creative works at CARIFESTA in St. Kitts, 2000 for his contribution to arts and culture; recognized for distinguished service to UVI, 2001; recognized as alumnus of Achievement from Illinois State University, 2002; awarded a 25-year service award from UVI, 2004. And in May, 2008, he received the first UVI Presidential Award for distinguished service to the University of the Virgin Islands.