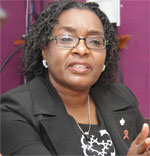 Rhoda Reddock is emerita professor of Gender, Social Change and Development and former deputy campus principal of the University of the West Indies, St. Augustine campus. For many years, she served as head of the Centre for Gender and Development Studies.  She is also a former lecturer in sociology at the UWI St. Augustine and associate lecturer in the Women and Development programme at the Institute of Social Studies, The Hague.  An activist in the Caribbean Women’s movement she was a founding member and first chair of the Caribbean Association or Feminist Research and Action (CAFRA). A former president of Research Committee-32 (Women and Society) of the International Sociological Association (ISA) (1994-1998) she is currently a Board member of RC 05 Racism, Nationalism, Indigeneity and Ethnicity and a member of the ISA Executive Committee. She has also served on the Council of the Caribbean Studies Association.  Her numerous publications include: Women, Labour and Politics in Trinidad and Tobago: A History, Zed Books, 1994 which was named a CHOICE Outstanding Academic Book for 1995, Plantation Women: International Experiences, Berg 1998 co- edited with Shobhita Jain,  Caribbean Sociology: Introductory Readings edited with Christine Barrow, 2000, and the edited collection Interrogating Caribbean Masculinities, The UWI Press, 2004 winner of the best-selling textbook award of 2007and most recently the co-edited volume,  Entangled Inequalities:, Decolonial perspectives: Europe and the Caribbean with Encarnacion Gutierrez-Rodriguez, 2021. She has also published over seventy-five peer reviewed articles and book chapters

In October 2001, she received the UWI Vice Chancellor’s Award for All-Round Excellence in Teaching and Administration, Research and Public service and in July 2002 was recipient of the Seventh CARICOM Triennial Award for Women at the Heads of Government Meeting of the Caribbean Community in Guyana. In 2004, Prof. Reddock was a recipient of a distinguished Fulbright New Century Scholars Award and in 2005-2006; she was visiting professor at the African Gender Institute, University of Cape Town, South Africa. In 2008, she received an International Woman of Courage Award for Trinidad and Tobago, from the US Department of State, and in March 2012, an honorary doctorate from the University of the Western Cape in South Africa. In October 2014, the UWI-NGC Research Award 2014 – Most Impacting Research Project – Breaking the Silence: A Multisectoral Approach to Preventing and Responding to Child Sexual Abuse and Incest in Trinidad and Tobago (with Dr. Sandra Reid).   Prof. Reddock is currently an elected expert of the UN Committee for the Elimination of Discrimination against Women (2018-2022).