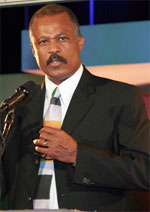 Professor Sir Hilary Beckles is Vice Chancellor of the University of the West Indies. He is a distinguished university administrator, economic historian, and specialist in higher education and development thinking and practice; and an internationally reputed historian. Sir Hilary is Vice President of the International Task Force for the UNESCO Slave Route Project; a consultant for the UNESCO Cities for Peace Global Programme; an advisor to the UN World Culture Report; and member of Secretary-General of the United Nations, Ban Ki-Moon, Science Advisory Board on sustainable development. He has received numerous awards, including Honorary Doctor of Letters from Brock University, the University of Glasgow, University of Hull, and the Kwame Nkrumah University of Science and Technology, Ghana, in recognition of his major contribution to academic research into transatlantic slavery, popular culture, and sport. Sir Hilary has lectured extensively in Europe, Africa, Asia, and the Americas and has published more than 10 academic books. He is Chairman of the Caribbean Community (CARICOM) Commission on Reparation and Social Justice. Sir Hilary is also founder and Director of the CLR James Centre for Cricket Research at Cave Hill Campus, and a former member of the West Indies Cricket Board (WICB). He is founder and inaugural Chairman of the High Performance Cricket Academy of the WICB. He is also Vice President of the Commonwealth Sports Ministers advisory body on Sport and Development. Sir Hilary is an editor of the UNESCO General History of Africa series.