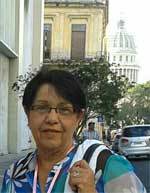 In 1985 she founded the Chair of Caribbean Art History and introduced the study of Caribbean arts into the undergraduate curriculum, the Masters in Art History and into the Master in Caribbean studies, organized by the Chair of Caribbean Studies at the University of Havana. Dr. Wood Pujols is visiting professor at UNAM (National Autonomous University of Mexico) in the Graduate program in Art History, and in the Faculty of Philosophy and Literature; and she also lectures in the undergraduate and graduate programs at the Universidad Iberoamericana (Ibero American University). Dr. Wood directs thesis and research groups relating to these study programs.

Dr. Wood has held the posts of Head of Department of Art History, Vice-Dean of Teaching and Dean of the Faculty of Arts and Literature at the University of Havana; as well as Vice Dean for the Instituto Superior de Arte de Cuba (Cuban Higher Institute for Art). Dr. Wood was Cultural Ambassador for Cuba in France (2001-2006), and Director of the Centre for Caribbean Studies at Casa de las Americas, and of its journal Anales del Caribe, from 2000 to 2016.

Dr. Wood has been the recipient of study grants awarded by the Institute for Research in Aesthetics, UNAM (Instituto de Investigaciones Estéticas de la UNAM), México, 1982; the University of Georgetown, British Guiana, 1984; the Archive of the Indies, Seville, 1986; the Centre for Puerto Rican Studies, CUNY, New York, 1995; and the Extraordinary Chair “Jose Martí”, CIALC-UNAM 2014-2015. She has been invited speaker for numerous academic institutions in American ad Europe, and has actively taken part in events in her field.

Dr. Wood was advisor on artistic education to the Ministry of Culture in Haiti, and is a member of the Scientific Council for Volume IX of the History of Africa, UNESCO, and of the Cuban Chapter of the International Association of Art Critics. Dr. Wood has received scientific recognition from the Cuban Academy of Science and the University of Havana. She holds the Distinction for Cuban Education and Culture. She was awarded the Asdi-Senior Grant by CLACSO, in 2009, the National Award for Artistic and Literary Criticism, in 2013, and the Medal of the Knight’s Order for Arts and Literature, France, in 2017.