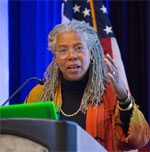 1) How did you come to specialize in Caribbean Studies?

My graduate work focused on the African Diaspora from the very beginning with designs of working on the Black communities in Peru. After an opportunity to do a summer school session at the African Caribbean Institute of Jamaica, I knew that the work in Latin America would have to wait. I have done most of my scholarship in the Caribbean.

2) How did your interest in and commitment to Caribbean Studies evolve?

I lived in Jamaica in the late 1970s and what a remarkable time that was for me as a young scholar, but one who was asking questions that were new – feminist ones – political economy of women’s work, and family. There is so much work to be done, so I keep on doing it alongside of my colleagues at UWI and in the trades union movement.

3) When did you first join CSA and what did it mean to you then?

I joined CSA in 1981 and attended my first meeting in St. Thomas, USVI. It was a welcoming moment, even though there were mostly political scientists and mostly men. I did not have to explain what I was doing, where I was doing it, and why it was significant to understanding a part of the world.

4) What were your goals for CSA the year of your presidency?

My goals for my presidency were to make CSA meaningful to as many scholars and activists as possible and to bring the meetings to a small island that was not the practice at that time. I also wanted to make the CSA solvent by making the meetings financially sound. Another goal was to make the meetings as interdisciplinary as possible so the humanities, arts, social sciences were represented in sessions and plenaries. Further, there was an attempt to have translation of major sessions – something hard to do in a place with limited language resources. 5) What did you recognize to be the greatest obstacles facing CSA and Caribbean Studies during your presidency? My decision to hold the meetings in Antigua did not anticipate the interference of local politics into the event. Why I did not think of this in advance had to do with my focus on fund raising, developing a tight program and covering some of the gaps that appear in any academic meeting. Nonetheless, the meetings were in a sense hijacked and the CSA was held for ransom. For example, difficult conference center that was to be “free” all of
sudden cost the CSA $2000. 12 hours before the beginning of the conference and the increase in departure tax that appeared over night were just two events that made this a hard one to swallow.

5) What did you consider to be the greatest accomplishment of CSA that year?

The second largest CSA meeting up to that date. Raising enough money for CSA that year and putting the organization on sound fiscal foundation.

6) Why did you choose the location you did for the CSA annual conference that year?

I had good experiences in Antigua as a researcher and made contacts with the head of what is now the School of Continuing Studies. Members of the CSA Exec Council told me, that I could not hold meetings in Jamaica since we had met there 3 years before. This was unfortunate because I had more considerable contacts and resources in Jamaica than in Antigua, but I thought this was a decent choice.

7) Where do you hope to see CSA in the next ten years?

CSA is still trying to find financial stability. So much money has been wasted or squandered. So that’s the goal – keep it going with a good secretariat, develop other programs outside of the annual meeting, and keep young scholars coming on board and keep the established scholars coming back.

8) What is one of your fondest CSA memories?

Michael Manley’s speech in Ocho Rios; CSA fete in Havana; party in St Thomas 1981; riding through the countryside in Guadeloupe- just to mention a few

9) What are you doing now in terms of the Caribbean?

I continue my research and writing on women, work and family, organized labor and gender and globalization in the Caribbean, particularly in Jamaica.

10) Where do see the future of Caribbean Studies?

If it survives the financial crisis of 2008-09, it will be around because there is a significant sized cadre who believe in this organization, and work hard to keep it going.

11) What would you recommend to a young scholar starting in Caribbean Studies?

I suggest for young scholars to read widely across all of the disciplines that pertain to the region so they have the depth and breadth to understand the diversity and specificity of the region’s cultures and societies. It is also important to have at least an intermediate level or particularly reading comprehension of at least 2 languages of the region. One of the benefits of an interdisciplinary organization is just that – interdisciplinary thinking and writing. In the CSA the poets know economics and politics.