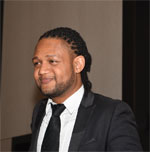 Keithley Woolward is an Advanced Assistant Professor of French and Francophone Studies at the University of The Bahamas, Nassau, Bahamas. Woolward also served as Director of Graduate programmes (Interim) during the College’s transition to University status.

Originally from Nevis (St. Kitts-Nevis) Woolward has travelled, lived and studied in the United States and France eventually earning a Ph.D. in French and Francophone Studies from New York University (2008) specializing in the Literary and Cultural Traditions of the Maghreb, Sub-Saharan Africa and the Caribbean as well as Comparative Postcolonial Studies. He has published articles and presented research on French Caribbean, Haitian and African American writers (living in France), Frantz Fanon, and Caribbean Theatre. His most recent article “Queering the line: Challenging Gender in Myriam Chancy’s Spirit of Haiti” appeared in a special issue of Caribbean Quarterly: “Masculinities in Caribbean Literature and Culture” (2014). He is co-editor of a forthcoming special issue of Caribbean Quarterly on Caribbean Theater (2017). He is also completing a book tentatively titled Frantz Fanon Dramaturge. This is the first book length study to engage with and attempt to deliver the argument clamoring to be made in and through Fanon’s commitment to drama and the dramatic poetics of decolonization offering fresh insight into the ways in which drama and dramaturgy influenced Fanon’s theories from Black Skin, White Masks to the Wretched of the Earth.

Woolward first joined the CSA as an undergraduate presenter (chaired by longtime CSA member Joseph Dorsey) at the annual conference in Panama City, Panama in 1998. Most recently he served as Program Co-Chair with Karen Flynn for CSA’s 40th annual conference in New Orleans, Louisiana and Vice-President 2015-2016.

Active in the art, theater and culture community of The Bahamas, Woolward has curated and staged the performance installation piece “Haitianize” for the Seventh National Exhibition: Antillean‐An Ecology at the National Art Gallery of the Bahamas (2014) as well as “Haitianize(d)ictionary”: A visual documentation Project was exhibited during Transforming Spaces at the D’Aguilar Art Foundation (2015).