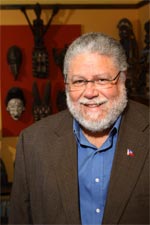 CARRYING FORWARD A HAITIAN FAMILY LEGACY OF SCHOLARSHIP AND ACTIVISM

Patrick Bellegarde-Smith is professor emeritus of Africology, formerly the Department of Afro-American Studies, at the University of Wisconsin-Milwaukee. He served as faculty there from 1986 to 2010, chairing the department on three different occasions. He taught courses in Women’s Studies and in the LGBT program as well. He is a lifetime member of the Caribbean Studies Association, a lifetime member of the Association of Caribbean Historians, and just completed his term as president of the Haitian Studies Association in 2015 and continues as President of the Congress of Santa Barbara (KOSANBA), the scholarly association for the study of Haitian Vodou. He is an oungan asogwe, a priest of Vodou. He serves as associate editor of the Journal of Haitian Studies, and is on the editorial boards of the Journal of Africana Religion, of Kalfou: A Journal of Comparative and Relational Ethnic Studies, and Chantiers, at the Universite d’Etat d’Haiti.

Professor Patrick Bellegarde-Smith was raised in Port-au-Prince, Haiti and left at 16 years old to attend the University of The Virgin islands. He continued his studies in political science at Syracuse University, transferring to The American University where he received his doctorate in international relations, diplomatic history, and comparative politics in 1977. His grandfather, Dantes Bellegarde, was both a man of letters, and Haiti’s foremost diplomat, serving as his country’s ambassador in France, the Vatican, at the League of Nations, in the United States, at the Organization of American States, and later at the United Nations. As a man of letters, his friend and nemesis was Jean Price-Mars. Thus, it is fitting that the first Jean Price-Mars Medal was conferred upon his grandson (Patrick) by the State University of Haiti, in recognition of his scholarship on religion, and issues of cultural and national identity.

Patrick Bellegarde-Smith was raised in the extended family that included his grandfather, at their family home in central Port au Prince. Yet, Patrick was born worlds away (literally and figuratively) in the rural Idaho of his working-class father, but left for Haiti as a baby. Perhaps these diverse origins, in terms of class, race and place, in part explain Bellegarde-Smith’s catholicity of intellectual interests and keen analytical eye.

Patrick’s intellectual production has been both peripatetic, yet focused. It has ranged across areas as diverse as the political economy of US relations with Haiti, to religion, spirituality and themes of race, class and gender. Among his many notable published works are The Breached Citadel, Fragments of Bone and In the Shadows of Powers. Patrick has also accumulated over his three decades of teaching a fiercely loyal ‘family’ of former students who maintain their close connections to him.