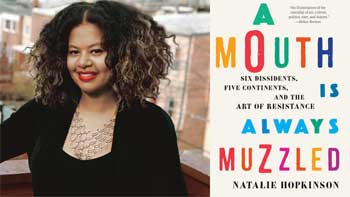 Natalie Hopkinson, Ph.D., is an assistant professor in Howard University’s doctoral program in the Dept. of Communication, Culture & Media Studies. She has been an editor, critic, and columnist at the Washington Post, The Root and the Huffington Post. Her most recent book, A Mouth is Always Muzzled, was winner of the 2018 “Spirit” Award from the Independent Publishers Association and longlisted for the 2019 PEN America’s Diamonstein-Spielvogel Award for the Art of the Essay. Her 2012 book Go-Go Live (Duke University Press) was nominated for the Hurston/Wright Legacy Award in nonfiction, and was named to SPIN magazine’s list of best books about music and the Washington Post’s best books about Washington, D.C.

REVIEWS for A Mouth is Always Muzzled: Six Dissidents, Five Continents, and the Art of Resistance. (2018, The New Press)

The New Yorker magazine assessed it: “Through the lens of Guyana’s 2015 national elections, this essay collection shows how the country’s political and cultural life is still influenced by the twin legacies of British colonialism and the sugar trade.”

As people consider how to respond to a resurgence of racist, xenophobic populism, A Mouth Is Always Muzzled tells an extraordinary story of the ways art brings hope in perilous times. Weaving disparate topics from sugar and British colonialism to attacks on free speech and Facebook activism and traveling a jagged path across the Americas, Africa, India, and Europe, Natalie Hopkinson, former culture writer for the Washington Post and The Root, argues that art is where the future is negotiated.

Part post-colonial manifesto, part history of the British Caribbean, part exploration of art in the modern world, A Mouth Is Always Muzzled is a dazzling analysis of the insistent role of art in contemporary politics and life. In crafted, well-honed prose, Hopkinson knits narratives of culture warriors: painter Bernadette Persaud, poet Ruel Johnson, historian Walter Rodney, novelist John Berger, and provocative African American artist Kara Walker, whose homage to the sugar trade Sugar Sphinx electrified American audiences. A Mouth Is Always Muzzled is a moving meditation documenting the artistic legacy generated in response to white supremacy, brutality, domination, and oppression. In the tradition of Paul Gilroy, it is a cri de coeur for the significance of politically bold—even dangerous—art to all people and nations.