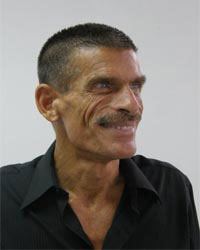 Dr Nicholas Faraclas is a full tenured Professor in Linguistics at the University of Puerto Rico, Rio Piedras. He received his PhD in Linguistics from the University of California at Berkeley in 1989, where he was awarded a National Science Foundation Fellowship and two Fulbright Fellowships. He has published more than 25 books and 80 scientific articles and chapters, and presented at more than 100 professional conferences in more than 40 countries in Africa, Asia, the Pacific, South America, the Caribbean, Europe, and North America. Having supervised more than 40 PhD and MA theses, he has also developed and taught more than 50 different courses in a considerable number of distinct areas of theoretical, descriptive, socio-, and applied linguistics at universities in North and South America, Africa, the Pacific, Europe, and the Caribbean. Over the past four decades, he has been conducting research on postcolonial linguistics and colonial era contact languages, as well as promoting community based popular education and literacy activities for both adults and children in the Caribbean, Latin America, Africa, Asia and the Pacific.