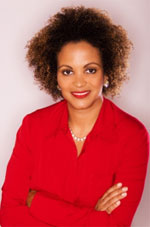 Professor Heather D. Russell has always sought to research, teach and serve at the intersections of literary and cultural studies, Caribbean and African diaspora studies, the humanities and the social sciences. She has just been promoted to Professor of Literature at Florida International University beginning this this Fall 2016. In addition, she was elected department chair of the English department and assumed her position in August.

She is the author, most recently, of Rihanna: Barbados World-Gurl in Global Popular Culture, co-edited with Hilary M. Beckles (Mona:  UWI Press, March 2015) – a cultural studies collection that brings together U.S. and Caribbean based scholars to theorize issues of gender, sexuality, race, culture, and economy in relation to globally renowned, Barbadian born, pop superstar Rihanna.  Using the concept of diasporic citizenship as a central theoretical frame, this book examines trans/national circuits of exchange as they pertain to the commoditization and movement of culture, knowledge, values, and identity. Russell’s own intervention carries forward questions of Rihanna’s diaspora citizenship, exploring these in context of her artistic articulations of woman’s right to full erotic expressivity read within and against the discursive economies of race and slavery.

Her monograph, Legba’s Crossing: Narratology in The African Altantic (2009) was reissued in paperback in 2011.  Invoking the Haitian lwa (spirit) Papa Legba, who is the “god of the crossroads,” as the hermeneutical sign of African Atlantic narrative intervention, the works chosen for analysis in her book challenge conventional Western knowledge structures through innovative use, disruption and reconfiguration of narrative form.  Legba’s Crossing can be read alongside a general body of recent scholarship on black modernity that works to de-center western philosophy as the prima facie repository of critical literary theory.  As a consequence, one of the central contentions of Legba’s Crossing is that all of the key historical moments of black subjugation and resistance throughout the global south are legitimized by discourses marked by ethnocentricity and binary oppositions that are hierarchized. She explores the linear narrative that moves insidiously from the discourse surrounding, ‘the civilizing mission’ of the enslavement and colonizing projects, through the idea of “laissez-faire economics,” “development models,” “Reaganomic trickle-down theory,” to “postindustrial economy,” to the advent of globalization, and the rise of neoliberalism, on through the current discourse of “humanitarianism.”

In addition, Heather D. Russell has published in journals and books on a wide array of subjects related to Caribbean and African Atlantic scholarly concerns, with recent essays on Vybz Kartel (“Post-Blackness and All of the Black Americas,” in The Trouble With Post-Blackness. Eds Houston A. Baker and Merinda Simmons (Columbia UP, 2015)), on Quentin Tarantino’s Django (“Why I Needed to See a Black Woman Spit in a Pot,” in Critical Essays on Django, Unchained.  Ed. Ishmael Reed.  New York:  Path Press, 2015) and in a collection of essays on Jamaica’s Peoples National Party at 75, (“Sycorax Soundings:  The People’s National Party at 75 and beyond. Thoughts on Colour, Class, Gender and Sexuality” in The People’s National Party at 75.  Ed. Delano R. Franklyn. Kingston:  Wilson, Franklyn, Barnes, 2013).  She is currently at work on: Black and White TV: Independence, Popular Culture and Globalization (1962-1992), which examines the national broadcasting corporations in the Anglophone Caribbean as part of the decolonization and independence projects of the 1960’s.

In keeping with her commitment to the study of the Humanities, over the past ten years she has worked with various state-based affiliates of the National Endowment for the Humanities (NEH), and more recently with the National Humanities Center. She is a 2015 recipient of a National Endowment for the Humanities grant, for which she served this year as a Co-Project Director, along with Jacqueline Mays, for an extremely competitive Landmarks in American History Seminar: “Jump at the Sun:  Zora Neale Hurston and Her Eatonville Roots.” They received an award for $170, 500 to fund two week-long teacher workshops (Summer 2017) focused on setting the brilliant and prolific Floridian author, folklorist, anthropologist, Harlem Renaissance contributor and feminist icon, Zora Neale Hurston, in scholarly, historical and sociopolitical context.

Finally, she was named one of South Florida’s Top Black Educational Leaders for 2014, by Legacy Magazine and is the recipient of this award again this year for 2016. She is a past student of St. Andrew High School for Girls, Jamaica. Finally, Professor Russell also proudly serves on the Executive Council of the Caribbean Studies Association.

In her own words: “I believe in the value of scholarship, teaching, and service that is activist in focus and promotes social justice.  To continue to do this work demands, I think, expanding the critical apparatuses through which we conceive the world, and speaking, teaching, writing, in and from the margins while simultaneously resisting marginalization and subverting the oppressiveness of binary oppositional thinking.  Whether engaging with students, teacher training, or community outreach, my goal is always towards the unfinished project of the realization of the unfettered ability of peoples of African descent to live lives of decency, dignity, and humanity.”