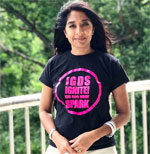 Gabrielle Hosein has spent twenty years in Caribbean feminist movement-building. She began using poetry and Rapso as part of the Ten Sisters Spoken Word Movement between 2000 and 2004. In 2005, she created Steppin Up: A Feminist Movement-Building Game, which has been played by Caribbean participants from Cuba to Suriname, and has been part of the curriculum of the IGDS Cave Hill Campus Caribbean Institute in Gender and Development regional training for more than a decade. Her teaching has particularly focused on participatory approaches to consciousness raising, strategy sharing and solidarity building among UWI students with the creation of activist ‘popular actions’ as assignments since 2006. Focusing her research since 1999 on areas such as girlhood, women and political power, Indo-Caribbean feminisms and, more recently, Caribbean feminist solidarity with Indigenous People’s struggles, her most recent edited collections are Indo-Caribbean Feminist Thought: Genealogies, Theories, Enactments (co-edited with Lisa Outar), and Negotiating Gender, Policy and Politics in the Caribbean: Feminist Strategies, Masculinist Resistance and Transformational Possibilities (co-edited with Jane Parpart). Her forthcoming edited collection, Indigenous Geographies and Caribbean Feminisms: Common Struggles Against Global Capitalism is co-edited with Levi Gahman. Faculty at the IGDS St. Augustine since 2005 after being among the first graduate students of the Institute in 1997, she has provided guidance as Associate and now Executive Editor of the UWI’s first open access, on line journal, the Caribbean Review of Gender Studies (CRGS) since 2009. In 2011, she began to write publicly about Caribbean womanhood and citizenship in her blog/Guardian column, ‘Diary of a Mothering Worker’. Since 2016, she has been the Head of the IGDS, St Augustine Unit and her focus is on envisioning a generational transition which builds on a strong history of research, teaching and advocacy while expanding the Institute’s leadership in Caribbean cyberfeminisms, gender-based violence, gender-responsive budgeting, masculinities and other areas since. Under her headship, the IGDS has strengthened its undergraduate mentorship activities, known as ‘IGDS Ignite!’, has broadened its professional preparation of graduate students in what’s called a ‘IGDS CV+ approach, has expanded its on-line reach through its #sparkfeminism use of Facebook, Instagram, electronic billboards, radio and other media; and has added a focus on gender responsive budgeting and gender, peace and security to its areas of capacity-building and collaboration.  This year the IGDS conceptualised two campaigns for International Women’s Day, #speakyourtruth, which contained content focused on women’s rights as everyone’s responsibility; and #Caribbeanmencan, which provided messages across a range of issues as part of a call for vocal and visible solidarity from men. As well, for the second year, the IGDS SAU played a key role in organizing a national rally and march for International Women’s Day.

Other Publications in Refereed Journals