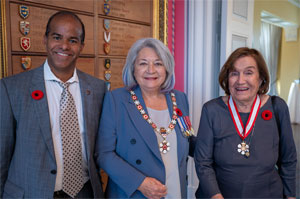 Professor Emerita of York University, Dr. Frances Henry, a long time CSA member, recently received the Order Of Canada, in Ottawa Canada which was presented to her by Governor General Mary Simon who is the first Aboriginal person to ever hold this high office in Canada.  The Order of Canada is one of the highest civilian awards offered in Canada. Dr Henry was one of Canada’s eminent scholars on race relations and immigration issues, particularly focused on the Caribbean community. Dr Henry’s research and writing influenced generations of subsequent younger scholars in the Caribbean and the diaspora.