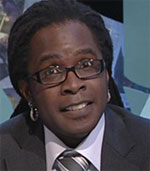 Guadeloupe’s principle areas of research have been on the manner in which popular understandings of national belonging, cultural diversity, religious identity, and mass media constructions of truth, continue to be impacted by colonial racisms and global capital. He has pursued these interests in his research and publications on social processes on the bi-national island of Saint Martin  & Sint Maarten (St. Martin), Brazil, Aruba, Saba, Sint Eustatius, and the Netherlands.  He is the author of the monograph, Chanting Down the New Jerusalem: Calypso, Christianity, and Capitalism in the Caribbean (University of California Press, 2009). Essays of Guadeloupe have appeared in Transforming Anthropology, Latin American and Caribbean Ethnic Studies, Social Analysis, Women Studies International Forum, and the Journal for the Study of Religion.