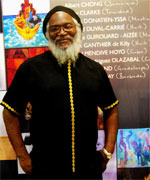 For over two decades Dr. Clinton Hutton has been engaged in ongoing research around various expanding interconnected topics that he deemed to be relevant to the articulation of postcolonial discourses and the fashioning of an episteme, ontology and agency congruent with the making of freedom, justice and sovereignty in the Caribbean.

In terms of subject categories, Clinton’s research focuses on History, Caribbean/African diaspora culture (including creativity and the creative arts), cosmology/spirituality and philosophy, especially with respect to epistemology, ontology and aesthetics and their relevance to freedom, justice, sovereignty, subordination and agency – in other words, their impact on political thought, and political culture and praxis. Clinton’s research seeks to deal with what he considers to be   some of the short comings of traditional political science theories and methods (applied to the post-colonial state and society) in understanding, evaluating and explaining the politics of empire, anti-empire and post-colonialism in the Caribbean.

Dr. Hutton argues that a radical understanding is required of the fundamental importance of culture (beyond mere political culture) in the shaping and defining of political phenomena such as power and relationships to power. In consideration of the important phenomena of power, he argues, we must look at the epistemology of power, the aura of power, the performance and rituals of power and the ontology of power. Related to this are the important indices of freedom, justice, sovereignty and the nature of political agency and political participation. These indices must be examined closely in any particular society since it is upon cultural structures and super structures that political architecture is often constructed. This is too often obscured in existing political philosophy and political theory according to Hutton.

Of note here is that one of Clinton’s books looks squarely at the Haitian Revolution and it is entitled: “The Logic & Historical Significance of the Haitian Revolution & the Cosmological Roots of Haitian Freedom.”   It was published by Arawak Publications in 2005. In the book Hutton argues that – The deeds, principles and values of the Haitian Revolution were not the same as that of the English, American or French revolutions. The Haitian Revolution held that a person’s right to his/her own body is un-impeachable, and that a people or a nation has the right to self-determination. Furthermore that all races of people are equal and must be treated as such as a central basis for justice. Notably, slavery, colonial subjection and racial inequality existed under the regimes that were established in the wake of the English, American and French Revolutions.

Hutton argues that a core of Haitian Revolution scholars, including the great C.L.R. James himself, in his classic book, The Black Jacobins, wrongly assume that the ideological and intellectual foundations of the Haitian Revolution were rooted in the French Enlightenment and White abolitionist thought?

In stark contrast Dr. Hutton asserts that the epistemology, principles and values of the Haitian Revolution were in stark contrast to those of the English, American and French revolutions. In short he argues that the Haitian Revolution had its own knowledge system rooted in the agency and cultural ethos of enslaved Africans and goes on to look at its impact on modern universal values.

Other books that Clinton Hutton has worked on are: Leonard Percival Howell and the Genesis of Rastafari. Which was published by UW Press in 2015 and co-edited along with Jahlani Niaah, Daive Dunkley and myself (Michael Barnett).

Not to be left out is the most recent book written by Dr.Hutton, entitled: Colour for Colour Skin for Skin: Marching with the Ancestral Spirits into War Oh at Morant Bay and based on his Ph.D. Thesis which focused on Paul Bogle and the Morant Bay rebellion in Jamaica. This book was published by the notable Caribbean publishing company, Ian Randle Publishers, and was released just in time to commemorate the 150th Anniversary of the Morant Bay Rebellion in October of last year.

Dr. Clinton Hutton is: a Lecturer in Political Philosophy and Caribbean and African Diasporic Culture and Aesthetics, in the Department of Government at the University of the West Indies, Mona Campus.

As a member of the first plenary session on the conference theme, he will speak on Spirits and Revolution in Haiti and the Making of the Modern World. In his presentation he intends to examine the cosmological roots of the Haitian revolution and its impact on the shaping of identity in the modern world.