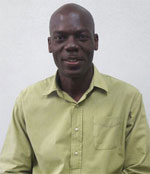 Dr. Don Marshall is Director and Senior Research Fellow of the Sir Arthur Lewis Institute of Social and Economic Studies, The University of the West Indies, Cave Hill Campus.

He holds a PhD in International Political Economy and is the author/editor of  three  (3)  books,  five  (5)  monographs  and  several  scholarly  articles  in esteemed journals.

Statement by Don D. Marshall with respect to his scholarship since joining UWI

I joined the University of the West Indies, Cave Hill Campus in August 1996 as a Temporary Lecturer in Political Science in the Department of Government, Sociology and Social Work (GSSW). It was in the course of that academic year that I applied for the post of Research Fellow in the then Institute of Social and Economic Research and successfully was granted a tenure track appointment beginning September 1 1997.  I have since built my career and contributed to the University in what is now the Sir Arthur Lewis Institute of Social and Economic Studies (SALISES).

I am a political scientist, trained in International Political Economy, a sub-discipline aimed at transcending both the state-global divide as well as the division between politics and economics – when addressing social change and development.  The defining feature is the emphasis on examining relations of power globally and locally as these impact states, markets and households.  I have been fortunate to be a part of the multi-disciplinary environment of SALISES, and to help shape its policy impact orientation first as a Fellow and, since 2015 as its Director.

In terms of refereed research output, I have authored and produced 3 books, 10 chapters in books, 16 journal articles as well as 8 monographs.

The body of work critiques Anglo-American globalization, conceives of globalisations, locates the Caribbean development problematic within such an imaginary and argues that alternative, sustainable futures are possible. Its praxis lies in how I interrogate enterprise culture in the Caribbean pointing to the dominance of merchant capital in these parts and how such a tendency contributes to the short term horizons of local investors.  For the first 10 years of my career I produced work along three fronts contributing to development theorising:

Examining the Caribbean state when under capture by populists and commercial dealing elites.  I consistently argued that when populist driven politicians and merchant capitalists together form a ruling class, it led to low level developmental outcomes.

From 2007 onwards I turned my focus to the role of Caribbean international financial centres in the global geography of financial services provision.  It was an exploration of how global financial governance works, who sets the rules, whose standards matter, who was included and the exclusionary character of many of these organisations that made up the international financial architecture.  It has allowed for a rich vein of research, graduate teaching/supervision and public service intervention:

The current challenges of climate change and China’s novel pathway to globality add to what the region confronts and these shall form a critical part of my research agenda in consonance with the strategic plan of the SALISES Cave Hill Campus.  In between I have researched public policy formulation challenges in the region and youth unemployment.  Indeed, it is in the latter vein, the focus on youth unemployment, the challenges of those not in education, employment or training where I formed a part of a team to win Best Research Award as part of Campus Research Day celebrations.

In summary, mine has always been to address the Caribbean International Political Economy complex over time with the express aim of highlighting where development transformation is possible, via the structural opportunities on offer at specific conjunctures.  It is both reflective of my optimism of will and intellect and it accounts for my sustained quarrel with imperialism.

SALISES is heir to a rich and distinguished history of research inherited from the work of the Institute of Social and Economic Research (ISER), which was established at the birth of the University College of the West Indies in 1948. Among the outstanding scholars who were either affiliated to or worked closely with ISER were MG Smith, William Demas, Lloyd Braithwaite, RT Smith, George Cumper, Lloyd Best, CY Thomas, Kari Levitt and Havelock Brewster. Together and individually they were responsible for a range of theoretical interventions as well as empirical investigations that lay the foundations for contemporary social sciences in the Anglophone Caribbean. Further outstanding contributions to theory and research came from, among many others, Carleen O’Loughlin, Alister McIntyre, Joycelin Byrne (now Massiah), Vaughan Lewis, Norman Girvan, Eddie Green, Patrick Emmanuel (ISER Cave Hill), and Selwyn Ryan, Norma Abdullah and Jack Harewood (ISER St Augustine). The Institute is also the home of Social and Economic Studies, first published in 1953 and widely considered as among the leading academic journals of Caribbean research … read more at http://salisesregional.com/content/research