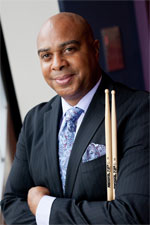 Dion Parson is an educator, composer, and a Grammy-award-winning drummer. A native son of the isles of St. Thomas in the Virgin Islands of the United States (VI-US),  Parson’s musical foundation ranges from classical, reggae, calypso, jazz, African, and pop music. As a youth, Parson was awarded a grant from the Virgin Islands Council on the Arts to study at Interlochen Music Academy in Michigan and was later selected to represent the Virgin Islands as a drummer in the McDonald’s All-American High School Band. Parson attended Rutgers University in New Brunswick, New Jersey where he studied percussion with Keith Copeland and William Moersch along with master drummer Michael Carvin. He received a Bachelor’s in Music Education and his Master’s in Jazz Performance from Rutgers University. He continues private studies in percussion, Caribbean culture and education philosophy.

In 1998, together with Blake, Parson founded 21st Century Band, a Caribbean-jazz band featuring the rich musical traditions of jazz fused with the rhythms of his native US Virgin Islands. Under Parson’s leadership, 21st Century Band is paving the way for Caribbean Jazz, releasing three live recordings at the prestigious Dizzy’s Club at Jazz at Lincoln Center in 2010, 2012 and 2019 with special guests like Terell Stafford and Marcus Printup. In June 2016, as an homage to their musical cultural heritage, they released the studio CD St. Thomas. In addition to his established presence on the jazz scene, Parson has also performed on Broadway with the musical Color Purple.

As an educator, scholar and master musician, Parson has taught at several educational facilities, including Rutgers University, Harlem School of the Arts (NY), New Jersey Performing Arts Center (NJPAC) Jazz for Teens program, Stevens Institute of Technology: Hoboken, New Jersey, USA, the Conservatory of Amsterdam, and others.  Always passionate in giving back to his community, in 2009 Parson founded the program “Mentoring Through the Arts of Music”, under the auspices of United Jazz Foundation, of which he is President. United Jazz Foundation (UJF) is a not-for-profit organization that seeks to identify, educate, and mentor students who aspire to begin a career in music.  He is developing program curriculum (Pre-K through High School) which consists of activities and experiences through music with the intent to insure developmental changes in children within their cultural context as well as to create a safe environment in which the children of the US Virgin Islands and the Caribbean can experience and learn about their own local heritage, as well as aspects of life outside of their community. He hopes to inspire them to blossom and become more confident as they focus on the learning process and achieving their dreams through music.

This summer (2020), Parson was able to create a successful summer program “Caribbean Music Institute”, under his United Jazz Foundation.  This summer camp is being taught by the members of his 21st Century band via an online virtual platform.  It teaches students the fundamentals in music theory, jazz improvisation, music notation and performance through live/virtual recordings sessions.

In 2019, Parson was appointed as the Chair of the Communication, Art, Theatre, Music and Dance Department of the University of the Virgin Islands.

DION HAS RECORDED OVER 80 Cd’s