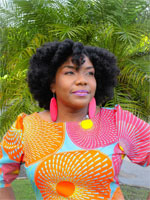 Dr. Dalea Bean is a Lecturer and Graduate Coordinator at the Institute for Gender and Development Studies, Regional Coordinating Office at the University of the West Indies. Before working with the IGDS, she taught in the Department of History at UWI in the areas of women’s history and Caribbean history. She pursued a Bachelor of Arts at UWI in African and Caribbean History and Political Science and graduated with a first class honours in 2002. She then completed her PhD in History on the topic “Jamaican Women and World Wars I and II”. Her general research interests include women and gender justice in Caribbean history, women in conflict situations, and gender relations in the Caribbean hotel industry. She has written book chapters, journal articles and has presented lectures internationally on these and other topics. She has also conducted gender equity and gender mainstreaming training regionally. Her first single authored book: “Jamaican Women and the World Wars: On the Front Lines of Change” was published in 2017 by Palgrave MacMillan and was be launched by the IGDS, RCO in November.