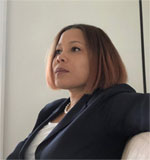 Andrea N. Baldwin completed her doctoral studies at the University of the West Indies Cave Hill campus Barbados in 2013 with a thesis entitled, Investigating Power in the Anglophone Caribbean Middle Class: Ideologies and Love as Power – Barbados as a Case Study. She is an attorney-at-law who also holds an MSc. in International trade policy and her research interests include Black and transnational feminist epistemology, theorizing pedagogy as a form of feminist activism, care in Black communities, and Caribbean cultural studies.

Dr. Baldwin is an assistant professor of Women’s and Gender Studies and Africana studies in the Sociology Department at Virginia Tech.  She has several publications including her most recent works published in 2018. These include “Troubling Our Intersections: A Caribbean Feminist Methodology as Resistance Approach published in Practices of Resistance in the Caribbean: Narratives, Aesthetics and Politic, Routledge; “Black Women’s Co-Mentoring Relationships as Resistance to Marginalization at a PWI”, published in Black Women’s Pedagogies & Praxes, Palgrave MacMillan; and “Moving Forward and Looking Back: Transnational Feminist Spaces – Margins, Methods and Modalities” in Outside In: Voices from the Margins of Academe, edited by Barbara Baker and Joyce de Vries.

Dr. Baldwin has also written and narrated a short documentary film entitled Self Care: A Radical Act which was screened at the Belin Feminist Film Festival in March 2018.  She is the recipient of several awards and was awarded an international fellowship at Brown University in 2010. She was also awarded the 2018 John S. King Excellence in Teaching Award from her former institution Connecticut College, where she also served as the Assistant Director of Africana Studies and the Associate Director for Praxis at the Center for the Critical Study of Race and Ethnicity. Dr. Baldwin was born and raised on the small Caribbean island state of Barbados and considers herself an all-around Caribbean woman and loves everything coconut and soca.

Baldwin, Andrea N. (forthcoming 2020). Lugones, Munóz and the Radical Potential of (Dis)identificatory Feminist Love for ‘World’ Making Beyond the Academe. Frontiers: A Journal of Women Studies special issue World-Making and World-Traveling with Decolonial Feminisms and Women of Color.