Barbara Christian Prize for the BEST book in the Humanities: 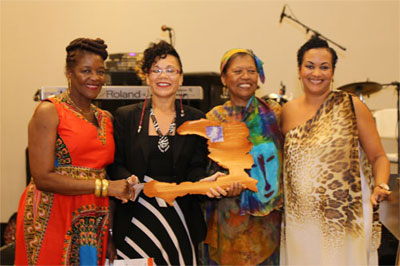 At CSA in Haiti this year we were privileged to award, in its newly configured form, the first Barbara Christian Prize for the best book in the Humanities  to Resisting Paradise: Tourism, Diaspora and Sexuality in Caribbean Culture (UP of Mississippi, 2015)  by Angelique V. Nixon.  After a touching tribute to her sister, Dr. Cora Christian made the announcement and conferred the award. I would like to especially thank Vilma Diaz, Donette Francis, Sheri-Marie Harrison, Rosamond King, and Omisè-eke Tinsley who all served along with me, as judges this year.

Our award focused on recognizing books, which in the spirit of Barbara Christian, foreground intersectionality, national and transnational identities, feminisms, gender, sexuality, class and political movement in the twenty-first century. We were additionally interested in books that struck a balance between theory and activism,  that envisaged a praxis of engagement.  The books under review were all brilliant and we certainly had our work cut out for us. All books were reviewed on a 5 point scale using a rubric which measured: originality of research; unmistakable evidence of intersectionality; reliance upon theories that are not solely western, canonical, Eurocentric;  Caribbean-American feminist/gender/queer analysis; and Barbara Christian’s legacy.

In the assessment of the committee:  “Resisting Paradise, recalls Christian’s Black Women Novelists,  in terms of the study’s center on the cultural production of black Caribbean women, and foregrounding how tourism affects constructions and experiences of gender and sexuality for women in the region and its diaspora. Recalling the diasporic concerns of Christian’s “A Rough Terrain,” Nixon’s book focuses on the complicated relationship between the Caribbean and its diaspora in African North America, and in the spirit of  Christian’s “The Race for Theory,” the study theorizes in variety of sites, including creative and activist work. Also reminiscent of Black Women Novelists, the study engages in a mode of literary criticism that remains conscious of the political implications of literary work. That is, literature is analyzed not for the sake of aesthetics alone but as part of a larger societal picture; and the author works conscious of the political importance of supporting the work of living, still-producing black women artists.”

Honourable mention went to La Rebelión de Las Niñas: El Caribe y la “conciencia corporal” ( Iberoamericana / Vervuert, 2015)by Nadia Celis and to Creole Renegades: Rhetoric of Betrayal and Guilt in the Caribbean Diaspora (UP of Florida, 2014) by Benedicte Boisseron, both of whom strongly represented Christian’s legacy. Heartfelt congratulations to all of the authors this year, and especially to Professor Angelique V. Nixon.