A Call for Books for The Barbara T. Christian Literary Award for CSA2022 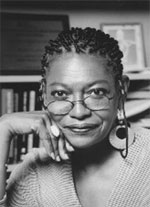 “What I write and how I write is done in order to save my life.…Literature is a way of knowing that I am not hallucinating, that whatever I feel is. It is an affirmation that sensuality is intelligence, that sensual language is language that makes sense.”
– Barbara T. Christian

Born and raised in the Virgin Islands of the United States (VI-US), Dr. Barbara Christian dedicated her life to challenging ideas about race, gender, class, and epistemology – rejecting the belief that critical theory emanated solely from the West and that African diaspora and Caribbean ways of theorizing were somehow inferior to Eurocentric philosophical concepts. A committed feminist, educator and published author, Dr. Barbara T. Christian pioneered the birth of black women’s literary criticism and theory.

This CSA literary award established in 2001 to honor the memory of distinguished Caribbean-American black feminist and womanist theorist Dr. Barbara T. Christian, celebrates her intellectual legacy and is given to the best book published within the most recent three-year period which explicitly and innovatively examines topics of race, gender, sexuality, class, and intersectionality.

CSA officially relaunched and expanded this literary award in New Orleans, with an exceptionally informative panel which included: Giselle Anatol, Carole Boyce-Davies, Percy Hintzen, Angelique Nixon, and Gina Ulysse. It remains indelibly marked in the annals of CSA as inspirational historical gems and standards of excellence worthy of respect, protection, and nurturance of gender, intersectionality and related disciplines within Caribbean Studies and Literature for generations to come. Appreciation extended for Heather Russell and Donette A. Francis assuming committee chair responsibilities from 2015-2017 and 2017-2019 respectively. With CSA2022 in Jamaica being completely virtual, Chenzira Davis Kahina continues to serve as the committee chair in collaboration with other members supporting the literary excellence of 21st-century writers contributing to keeping the Barbara T. Christian’s legacy alive.

In paying homage to Dr. Christian’s intellectual legacy and continuing relevance to the work of the CSA, we are confident that we will get many wonderful and competitive submissions this year as CSA celebrates 46 years of multi-disciplinary and multi-cultural scholarship, research, education and more. Monographs from all disciplines and fields of scholarship in the Humanities and Caribbean Studies will be granted serious consideration. Preference will be given to books written by one or more authors as opposed to edited volumes or anthologies.

“For one must distinguish the desire for power from the need to become empowered-that is, seeing oneself as capable of and having the right to determine one’s life. Such empowerment is partially derived from a knowledge of history. The black arts movement did result in the creation of Afro-American studies as a concept, thus giving it a place in the university where one might engage in the reclamation of Afro-American history and culture and pass it on to others. I am particularly concerned that institutions such as black studies and women’s studies, fought for with such vigor and at some sacrifice, are not often seen as important by many of our black or women scholars precisely because the old hierarchy of traditional departments is seen as superior to these “marginal” groups. Yet, it is in this context that many others of us are discovering the extent of our complexity, the interrelationships of different areas of knowledge in relation to a distinctly Afro-American or female experience. Rather than having to view our world as subordinate to others, or rather than having to work as if we were hybrids, we can pursue ourselves as subjects.” (Christian: 1988)

The winner will be announced at the CSA2022 virtual conference in June 2022. The prizes will include a certificate, plaque, cash award, and special Caribbean cultural gift. Authors are encouraged to submit for this Call for Books and prepare to join the Barbara T. Christian Literary Award legacy alongside past winners for CSA2016-2021 that include:

Authors, your name and publication could be next for CSA2022 in Jamaica!

“For I feel that the new emphasis on literary critical theory is as hegemonic as the world which it attacks. I see the language it creates as one which mystifies rather than clarifies our condition, making it possible for a few people who know that particular language to control the critical scene—that language surfaced, interestingly enough, just when the literature of peoples of color, of black women, of Latin Americans, of Africans began to move to ‘the centre.’” (Christian)

DEADLINE FOR SUBMISSION IS EXTENDED TO: FRIDAY, APRIL 22, 2022

An innovative study of the artistic representations of undocumented migration within the Hispanophone Caribbean.
https://utpress.utexas.edu/books/moreno-crossing-waters

New College in the Faculty of Arts & Science at the University of Toronto
The expected start date will be September 1, 2022.